Too Much of a Good Thing

Previous Next
Too Much of a Good Thing

Those of us involved in health, fitness and weight loss, can usually look forward to an increase in our client load after Chanukah.  The over-consumption of high calorie foods, like latkes and jelly donuts, along with general over-consumption over the 8 days has to have a negative effect.  Besides having to get good eating habits back on track, exercise will also play its part in restoring our health and losing the extra holiday weight.  But how much exercise is enough? Can some exercise actually cause harm?

Exercise is good for you.  So it stands to reason, the more the better, right?  WRONG! Riva loved to exercise and was careful to exercise on a daily basis for 15 years.  As Riva was about to turn 40 years old, she made an appointment to see me. There were many days exercising was becoming a physical struggle for Riva and now on many days, she didn’t have the mental fortitude to go out and do her routine.  When I examined Riva’s routine, I discovered that Riva was over-exercising and not giving herself time to recover between her aerobic workouts and also her resistance training.  There was no question we were going to have to overhaul her routine.

Riva loved power walking and swimming. On days she power walked, she was doing 70 minutes and at a very fast pace.  In a typical week, there were 5 sessions of power walking.  But Riva was also swimming 4 days a week and that meant that on 2 days, she was doing both. Riva also was doing resistance training daily (using weights or bands), some days she did a Pilates class, and every day she did a comprehensive routine of abdominal exercises.  She also stretched after every routine that she was doing.  If exercise is so great, then why was Riva feeling so lousy? 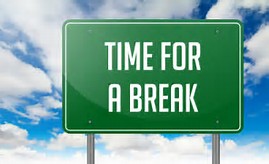 People who exercise too much and don’t allow for enough recovery can get into trouble.  Chelsea Bush is a journalist that writes about fitness and weight loss.  She interviewed exercise experts and found there are 10 signs that you might be over-training:

If we examine the requirements for exercising for good health, we see that we should be doing aerobics (walking, jogging, swimming, biking, or any exercise that raises your heart rate) most days of the week for at least 30-40 minutes at a moderate intensity.  If you work out intensely, you can do less.  And as long as you have a day in between, you won’t get into trouble. But if you try to do multiple workouts in the same day, your body might not be able to recover properly.

When it comes to doing resistance training (exercis

e that builds muscle), 48 hour recovery is recommended.  People at a higher level of fitness can get away with 24 hours, but less than this will not bring a productive workout, will leave your muscles sore, and will fatigue your body.

Stretching should be done daily. Holding each stretch for up to 30-35 seconds is acceptable, but never stretch on cold muscles. Overstretching can bring muscle soreness and can cause strains and sprains in your joints.

Riva and I had a few meetings and we decided to take a week off where she only stretched daily.  Afterwards we decided to alternate her power walks and her swims.  I cut her walks down by 10 minutes.  We also developed two routines that did not overlap in working different muscle groups.  She was able to do each of them on alternate days and still have great results.  After 3 weeks on the new routine, Riva began getting her motivation back, she stopped getting small colds and overall, she felt less fatigued.  She understood that more isn’t always better and the recovery is an integral part of having a productive exercise routine.

You are the one who needs to be responsible for your own habits of eating and exercising.  Make sure you have enough recovery time between exercise sessions. Exercising enough for our health–and not too much– will “add hours to your day, days to your year, and years to your life.”