This article is dedicated to the memory of my mother-in-law, who after more than a decade of Dementia, recently passed away.

Alzheimer’s disease and other dementias pose serious health risks. Alzheimer’s is the fifth leading cause of death for Americans over 65.  In the next decades, the number of cases worldwide is expected to nearly triple, from 46.8 million in 2015 to 131.5 million in 2050. And another 15%–20% of older adults diagnosed with mild cognitive impairment (MCI), according to the Alzheimer’s Association.

Use it or lose it

The deterioration of physical functions is mistakenly thought to be a part of natural aging.  For instance, the decline in muscle mass at 1% per year from our early thirties is only because we aren’t using our muscles.  Sitting at a computer is not physical labor that builds muscle mass.  Deterioration in heart and lung efficiency is also more pronounced in sedentary people than active individuals.  If we incorporate resistance training for our muscles and do something aerobic, most days of the week, then the statistics on these deteriorations become almost irrelevant. 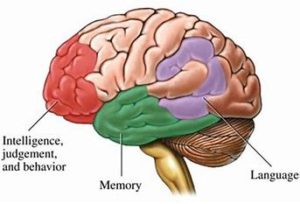 All of this also holds true of our brain function.  Brain power doesn’t have to wane as we age. According to Rowe and Kahn 1999, popular myths that senility, confusion, memory loss, “senior moments” and worse are normal parts of growing older are just not true.   As a matter of fact, the research overwhelmingly suggests that cognitive function in old age is reflective of how people live. Nutrition, stress, environment, physical activity, sleep and relationships and even individual views on aging all play a role. And recent advances in neuroscience suggest that aging adults retain the ability to improve their neural networks and cognitive function—a concept scientists call neuroplasticity.

We can break down the prevention of Dementia into two main categories, the risks of disease and the risk of unhealthy lifestyle.

Cardiovascular and metabolic conditions such as heart disease, type 2 diabetes, hypertension, high blood-cholesterol levels and obesity significantly affect a person’s chances of developing dementia. In fact, cardiovascular disease or diabetes double the risk (Alzheimer’s Society 2016). Other conditions, such as kidney disease, anxiety and sleep apnea, have been linked to dementia in some studies.  In order to reduce your risks of heart disease, diabetes, high cholesterol and high blood pressure, eat a diet that has a large variety of vegetables and some fruits, whole grains, lean proteins, healthy fats and include nuts and seeds on a daily basis.  Stay active and include formal exercise in your weekly routine.  If you can manage it, the four plus two formula (at least 4 aerobic sessions and 2 resistance training sessions) will serve you well to reduce your risk of all major diseases greatly.

There is overwhelming evidence that certain lifestyle factors play a significant role in dementia risk. Most of these factors are also closely linked to the risk of cardiovascular disease. Basically what is good for your heart is good for your head. The three primary lifestyle risk factors are physical inactivity, smoking and an unhealthy diet.  Reducing stress, staying hydrated and getting enough sleep are also integral for overall health and preventing dementia.

Before we talk about what actions to take specifically to keep our minds functioning well, let’s have a look at the basic way the brain executes cognitive functions.

There are a variety of cognitive tasks we perform daily, such as reasoning, memory, attention, language and physical movement. These play key roles in our lives, but arguably the most important cognitive task is executive function—encompassing the higher-level skills that control and coordinate other cognitive abilities. Executive function is loosely divided into organizational and regulatory abilities:

Cognitive decline usually affects specific aspects of executive function. For example, people with Mild Cognitive Impairment (MCI) may have significant memory loss (forgetting important information they would previously have recalled with ease, such as appointments or recent events). Others may lose thinking skills (ability to make sound decisions or to judge the time or sequence of steps needed for a complex task). Typically, memory impairments happen first. A decline in thinking skills may indicate a progression toward dementia. While those with MCI are at greater risk of developing Alzheimer’s disease, they don’t always get it. In some cases, MCI reverts to normal cognition, according to the Alzheimer’s Association.

Study after study show that aerobic exercise and resistance training are good for the brain. If frequency and intensity are sufficient, these forms of exercise can have a significant effect on executive function.  Three recent studies prove this point–Bamidis et al. 2014; Hotting & Roder 2013; Szuhany, Bugatti & Otto 2015.  While regular aerobic exercise can improve cognitive function in older adults, it is unclear whether the cognitive benefits are directly due to improvements in cardiovascular fitness (Hotting & Roder 2013). In other words, the exercise, regardless of physiological benefit has its own unique benefit to your executive brain function!

Exercise increases something called brain-derived neurotrophic factor (BDNF). The central nervous system has high concentrations of BDNF.  Higher levels of BDNF are also associated with better spatial, episodic and verbal memory. Lower levels of BDNF—particularly in older adults—have been linked to a smaller hippocampus and may contribute to memory impairment.  BDNF levels can increase after just a single session of aerobic exercise and rise even more with regular exercise. Regular resistance exercise has also been shown to improve cognitive function.

The data on aerobic and resistance exercise is complicated by numerous variables, including which type of exercise is performed and in what setting. Working out in group settings potentially provides more social stimulation than exercising independently. Outdoor exercise may provide greater sensory stimulation than exercising indoors. Hiking, for example, requires better navigation and coordination skills than walking on a treadmill. Social and cognitive stimulation have proved to be important modulating factors. Yet it is difficult to accurately assess how these factors contribute to overall results (Hotting & Roder 2013).

Exercising outdoors can provide a lot more benefit than staying in the gym on an exercise machine.  One who exercises outdoors is likely to exercise a little longer. Also, the benefits of the sun go beyond just getting vitamin D. UVA and UVB rays help prevent autoimmune disease. Sunshine helps limit oxidative DNA damage thus reducing melanoma cancer risk (YES–reduces when not overdone), as reported 15 May 2005 in Cancer Research.  This is the very cancer that we are told is caused primarily by overexposure to the sun.  Obviously a happy medium is needed.

If you are looking for a natural opiate, then you are looking for more endorphins.  Yes, sunlight when absorbed into the skin helps give us more of those too—so it can really lift your mood!  And a recent study even showed that people who get outdoors can end up sleeping better, too.

Just because we are aging doesn’t mean that there has to be a deterioration in our mental or physical health.  As a matter of fact, the human body can still improve in many ways through our 80’s.  It is important to take note of the following:

We have always thought that certain diseases were inevitable and not preventable.  Sometimes we can’t do anything to prevent various illnesses.  However, we can cut our odds of dementia and “add hours to our day, days to your year and years to our life”.