Previous Next
How’s your Fiber Intake?

A few weeks ago, Lara came to see me about refining her eating and exercise.  She hadn’t been feeling quite right for the last few months.  Although she needed to lose a few kilo, weight loss wasn’t her issue.  She was fairly educated as far as nutrition and exercise was concerned but she was having bouts of constipation, was often times hungry and her cholesterol was creeping up just above 200.  As we were talking and I was getting a general idea about her food intake, I asked her about her fiber intake.  She, in turn, asked me if all fiber is the same or if there is a difference between the types of fiber found naturally in foods (intact fiber) and fiber that is added into foods such as certain breakfast cereals? Let’s take a look at what fiber is and what it does.

Fiber is a type of carbohydrate that the body can’t digest. Though most carbohydrates are broken down into sugar molecules, fiber cannot be broken down into sugar molecules, and instead it passes through the body undigested. Fiber helps regulate the body’s use of sugars, helping to keep hunger and blood sugar in check. Dietary fiber — found mainly in fruits, vegetables, whole grains and legumes — is probably best known for its ability to prevent or relieve constipation. But foods containing fiber can provide other health benefits as well, such as helping to maintain a healthy weight and lowering your risk of diabetes and heart disease. We can break fiber down into two basic categories; soluble and insoluble, and we need both.

Soluble fiber dissolves in water to form a gel-like material. It can help lower blood cholesterol and glucose levels. Soluble fiber is found in oats, peas, beans, apples, citrus fruits, carrots, barley and psyllium. Insoluble fiber promotes the movement of material through your digestive system and increases stool bulk, so it can be of benefit to those who struggle with constipation or irregular stools. Whole-wheat flour, wheat bran, nuts, beans and vegetables, such as cauliflower, green beans and potatoes, are good sources of insoluble fiber.

According to the Harvard School of Public Health, fiber appears to reduce the risk of developing various conditions, including heart disease, diabetes, diverticular disease, and constipation. Despite these benefits, fiber probably has little, if any, effect on colon cancer risk.

High intake of dietary fiber has been linked to a lower risk of heart disease in a number of large studies that followed people for many years. In a Harvard study of over 40,000 male health professionals, researchers found that a high total dietary fiber intake was linked to a 40 percent lower risk of coronary heart disease. A related Harvard study of female nurses produced quite similar findings. Higher fiber intake has also been linked to a lower risk of metabolic syndrome, a combination of factors that increases the risk of developing heart disease and diabetes. These factors include high blood pressure, high insulin levels, excess weight (especially around the abdomen), high levels of triglycerides, and low levels of HDL (good) cholesterol. Several studies suggest that higher intake of fiber may offer protective benefits from this syndrome.

Diets low in fiber and high in foods that cause sudden increases in blood sugar may increase the risk of developing Type 2 Diabetes. Both Harvard studies—of female nurses and of male health professionals—found that this type of diet more than doubled the risk of type 2 diabetes when compared to a diet high in cereal fiber and low in high-glycemic-index foods. A diet high in cereal fiber was linked to a lower risk of type 2 diabetes.  Other studies, such as the Black Women’s Health Study and the European Prospective Investigation Into Cancer and Nutrition–Potsdam, have shown similar results. 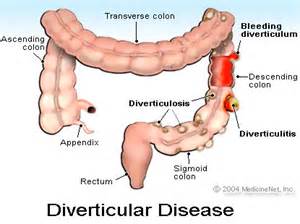 Diverticulitis, an inflammation of the intestine, is one of the most common age-related disorders of the colon in Western society. Among male health professionals in a long-term follow-up study, eating dietary fiber, particularly insoluble fiber, was associated with about a 40 percent lower risk of diverticular disease.

Constipation is the most common gastrointestinal complaint in the United States, and consumption of fiber seems to relieve and prevent constipation.  The fiber in wheat bran and oat bran is considered more effective than fiber from fruits and vegetables. Experts recommend increasing fiber intake gradually rather than suddenly, and because fiber absorbs water, beverage intake should be increased as fiber intake increases.

Studies have largely failed to show a link between fiber and colon cancer. One of these—a Harvard study that followed over 80,000 female nurses for 16 years—found that dietary fiber was not strongly associated with a reduced risk for either colon cancer or polyps (a precursor to colon cancer).

How Much Fiber do I Need?

The Institute of Medicine, which provides science-based advice on matters of medicine and health, gives the following daily fiber recommendations for adults:

Fiber occurs naturally in many foods as we mentioned.  This is called intact fiber. But in today’s world of processed foods, we often see the words “fiber added”.  These isolated fibers are either extracted from foods or chemically synthesized. They include inulin (from chicory root), pectin, polydextrose, methylcellulose and maltodextrin. If you see a highly refined food, such as white bread, or a food that normally contains no fiber at all, such as yogurt, that lists a fair amount of fiber on the nutrition label, chances are you’ll find one or more of these isolated fibers in the ingredients list. In contrast, if you see wheat bran, corn bran or oats on the ingredients list, for instance, you’re getting natural intact fiber.

Food companies also use small amounts of isolated fibers for a variety of reasons other than their fiber—for instance, to replace fat and sugar in salad dressings, dairy foods and frozen desserts; thicken puddings; prevent separation in chocolate milk or add crispness to pizza crust.

Isolated fibers have health benefits on their own (see below). But there’s not much evidence that adding fiber to food has the same effects as eating foods that are naturally high in fiber. The research on isolated fibers is inconsistent, and much of it is funded by manufacturers. Often, the amount of fiber added is too little to matter.  Different dietary fibers have different effects, and many fiber-fortified foods contain only one type of fiber, not the range found in naturally high-fiber foods.

For those that do need to supplement their fiber intake, I always advise them to use Psyllium seed (husks) in its pure, unadulterated form and exactly according to direction.  Over dosage can be harmful.  The results both in terms of naturally curing constipation without using laxatives and for many, a drop in cholesterol are usually very positive.

After I spoke to Lara she began to eat a larger variety of fiber-rich foods, both soluble and insoluble and felt better and lost some weight as her hunger diminished.

Eating enough of and the right kind of fiber will “add hours to your day, days to your year, and years to your life.”