Everyone has an occasional busy week. The kind of busy week that can cause late nights and sleep deprivation.  Additionally, we now live in a world where time zones are becoming irrelevant.  A global economy means companies are doing business all over the world. There are times when employees are dealing with offices 5, 6, 7 or more hours of difference between them.  Recently, a client of mine, who works for a multinational company, explained th

e difficulty of scheduling a meeting between himself in Israel, the CEO of the company in the United States, and a representative in Hong Kong.  Someone is going to have to be up in the middle of the night.

Besides businesses, even individuals are staying up later to communicate with family members.  The advent of cheap or free telephone and video communications like Skype, has made it easy to reach people wherever they are.  Normally you may have gone to sleep at 11 o’clock p.m. Now you often may wait up until your mother gets home from work, 7 hours away, and instead go to sleep at 12:30 a.m.

For most sleep problems, there are answers. People can make changes in order to get a good night’s sleep.  But for others, correcting their sleeping problems can be a very involved process.  Let’s first take a look at the negative effects of lack of sleep.

According to research done at the Mayo clinic, not sleeping enough results in impaired memory, slower reaction times, lack of alertness and grumpiness.  Tired people are less productive at work, less patient with others and less interactive in their relationships. According to the National Highway Traffic Safety Administration in the United States, more than 100,000 crashes each year are due to drivers falling asleep at the wheel.  Needless to say, for those of us who exercise regularly, we all know how unproductive a session can be when we have failed to get a good night’s sleep. 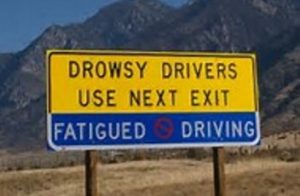 And we now know from recent studies that sleep deprivation can contribute to both higher cholesterol and type 2 diabetes.  Perhaps most important, people who are sleep deprived tend to be less active. As a result they give up on exercise and activity, and may also overeat, particularly later at night.

According to James Herdegen, MD, medical director of the Sleep Science Center at the University of Illinois, “When you don’t get enough sleep, your body appears to require more insulin to maintain normal glucose levels.  Sleep deprivation seems to alter the sympathetic nervous system — the body’s stress-control center — and hormonal balances, all of which affects glucose regulation.” Eventually, sleeplessness causes insulin-producing cells to stop working properly, elevating glucose levels and leaving you wide open to diabetes.

“Adding to the problem is the fact that fatigue also jolts the sympathetic nervous system into high gear, throwing off its ability to regulate blood sugar,” Dr. Eve Van Cauter says. Numerous experts point out that it takes just two nights of sleeping four hours or less to temporarily disrupt the process.

Obstructive Sleep Apnea (OSA) is a disorder characterized by episodes during which one stops breathing during sleep, typically due to an airway obstruction. This can lead to serious health consequences, including cardiovascular disease and type 2 diabetes. People with OSA can experience daytime sleepiness, snoring and shortness of breath which wakens the individual from sleep. Evidence-based treatments for OSA include continuous positive airway pressure and surgery. OSA is likely to be a barrier to exercise, given that the individual will often feel too tired to exercise. It should also be noted that 80% of OSA goes undiagnosed. Most people with this disorder live with it unknowingly.  Some of the symptoms of Sleep Apnea are:

Although it manifests itself more in overweight and obese people, there are individuals who are of normal weight who may have OSA.  If you suspect that you have sleep apnea, see your physician.  Your family doctor may send you to a sleep clinic for testing.  If indeed you have OSA, the first steps to take are to lose weight, avoid alcohol and sleeping pills, and avoid sleeping on your back. Changing sleep positions to improve breathing and stopping to smoke are also important. If these are ineffective then a positive airway pressure mask can be worn each night. These are known as a CPAP mask.  Sometimes dental devices can help and there are surgeries available in extreme cases. 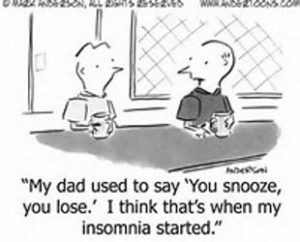 Another sleep disorder is clinical Insomnia.  Insomnia is characterized by difficulty falling asleep, frequent wake-ups, waking up too early, and not feeling rested. These symptoms must result in six or fewer hours of sleep on at least three nights per week to be considered clinically significant. Insomnia can be associated with irritability, depression, difficulty focusing or paying attention, headaches and other health problems. You can check to see if you have insomnia by using the Insomnia Severity Index. It is a seven-item questionnaire that identifies clinically significant insomnia.

If you do indeed have insomnia, see your primary care physician. The benefits of regular exercise should also be discussed, given research showing that exercise may improve insomnia symptoms. Exercise might also reduce reliance on sleep medications, many of which can result in dependency.

I have had many clients who were doing everything right in order to lose weight, lower blood pressure and blood sugar.  They ate right and exercised, but didn’t get all the results they sought.  It turned out with all of them had sleep disorders or sleep deprivation.  Getting enough sleep is as important to your health as your exercise and diet.  When you add that component into the mix, your health will improve, your weight loss will progress better, and your exercise will be more enjoyable and much more effective.  For many, it is absolutely THE missing component towards good health.  The recommended amount of sleep per night is 7-9 hours.  If you’re not getting that much sleep most nights, or your sleep is interrupted, see your physician. Try to improve your situation.  And if you think you need less sleep than most, it will catch up to you eventually.  Sleeping long enough and deep enough will “add hours to your day, days to your year and years to your life.”