Previous Next
Is it my Thyroid? (Part 1)

Rachel, a 54 year old who was in my weight loss program a few years ago, was frustrated.  She was doing everything right but her weight not only wasn’t going down, it was going up.  Needless to say, I was also frustrated.  I sent her back to her doctor to have her thyroid function retested.  She had been on a medication to regulate her thyroid for a long time, but something seemed very off to me.  Sure enough, there needed to be a major adjustment in her medication.

The vast majority of excess weight gain is because of ingesting too many calories and not using those calories through metabolism, activity and exercise. 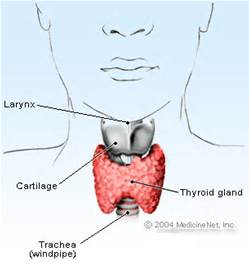 The kind of foods that we eat most certainly play a role also, as it is looking more and more that not all calories have the same effect on our body.  This is particularly true of certain sugars, like sucrose and high fructose corn syrup, which cause more weight gain than other foods of similar calories.  But sometimes weight gain isn’t because of over-consumption of calories or sedentary lifestyle.  Sometimes, we have something wrong with the way our body’s systems are working.  And many times, what isn’t working right is the thyroid gland! What is the job of our thyroid and why is it that 12 percent, about 20 million Americans, have some form of thyroid disease-the vast majority being women?  Women are 5-6 times more likely to have thyroid disease and females over the age of 60 have a greater likelihood of having problems with thyroid dysfunction.

The thyroid is a large ductless gland in the neck that secretes hormones regulating growth and development through the rate of metabolism.  It sets our body temperature and it ensures that the body’s systems are running smoothly.  If your thyroid function is off, the amount of calories that you should be burning through metabolism will be less, sometimes much less, that usual.  Remember, as we have stated in the past that the older you are, the greater player metabolism is in keeping your weight in check.  So if your metabolism is not running normally, weight gain is inevitable.  What are the symptoms of low thyroid function? Classic symptoms include fatigue, brain fog, weight gain, cold hands and feet, sluggish bowels, depressed mood, cognitive decline and low vitality (Longo et al. 2012). Unfortunately, even though someone may notice symptoms, blood–test results may still be within normal ranges. The way we test for most conditions in modern medicine, we need to see extreme pathology results for a diagnosis, so people often have to wait until a disease progresses to get help, rather than preventing the disease in the first place.

Dr. Marc Bubbs recently wrote a thorough paper on what triggers poor thyroid function.  He found 11 underlying causes of why our thyroids may go haywire and in turn cause weight gain, lethargy, poor quality hair and nails, hair loss, dry skin, fatigue, cold hands and feet, and constipation.  He also has solid suggestions concerning how to deal with each one.

What Can Trigger Poor Thyroid Function?

Consumption of processed sugars and carbohydrates has been steadily increasing over the past five decades (Johnson et al. 2007). This has greatly affected blood sugars, insulin and thyroid function. Insulin is the blood sugar hormone, and when everything is running smoothly, the body pumps out just the right amount to pull carbohydrates from the bloodstream and into cells. When people overindulge in high–carb breakfasts, sugary drinks and sweet treats, insulin function worsens, requiring the body to pump out greater amounts of insulin. Over time, this leads to insulin dysfunction and, if left unabated, insulin resistance and diabetes.

One in every two people in the United States has either diabetes or pre-diabetes.  Studies show a much higher incidence of thyroid dysfunction among people with type 2 diabetes (Menke et al. 2015; Kadiyala & Okosieme 2010). This thyroid dysfunction is likely due to blood sugar highs and lows that cause increased release of the stress hormones that help to control blood sugars. Eventually, this has negative impacts on the release of TSH (Rettori, Jurcovicova & McCann 1987), and a perpetual cycle can develop—high blood sugar leading to slower thyroid function (compromised metabolism) and subsequent weight gain, which then worsens blood sugar control and thyroid function (Knudsen et al. 2005).

2. The State of Being Overweight or Obese

The satiety hormone leptin plays a major role in obesity and is produced by fat cells to signal the brain “I am full,” thus putting the brakes on sugar cravings. However, a Western diet, poor food choices, insulin dysfunction and stress can all disrupt the leptin signal to the brain, leading to constant cravings (Macedo & Diez–Garcia 2014). Unfortunately cravings are usually for processed carbs and simple sugars. Leptin dysfunction goes hand in hand with both diabetes and obesity, but research also suggests a strong association with thyroid dysfunction as well (Zimmerman–Belsing et al. 2003).   While in theory people need to run a caloric deficit to lose weight, the general advice from doctors to patients with sub-clinical thyroid condition—”Eat less; move more”—is too general to achieve real progress. In fact, it often makes things worse when not varying the routine enough from time to time and building in more intensity!

Research is clear: In a person with obesity or excess weight, the body is on fire! That’s right: with weight gain and insulin dysfunction, systemic and chronic inflammation takes root. A state of inflammation impairs thyroid function. Inflammation reduces thyroid hormones in the short term and negatively influences thyroid receptors in the long term (Kimura & Caturegli 2007).

Stress is a major underlying root cause of thyroid dysfunction. In today’s society, we’re constantly connected and on the go. While this can be fantastic for productivity, it takes a toll on the brain and, ultimately, the thyroid. The stress response begins in the brain, which then acts on the pituitary gland, and this in turn relays messages to the rest of the body. If we “wear out” the thyroid gland with long, busy workdays and never–ending assaults of emails, texts and social media updates, its function begins to slow, resulting in less thyroid–stimulating hormone. Less TSH output by the brain means less thyroid hormone output, leading to fatigue, weight gain and low mood.

Restore resiliency by reducing stress levels. Limit phone and computer use, spend more time in nature, and eliminate all stimulants such as coffee for at least 1 week.  Deal with the stresses in your life!

5. The Liver Is Working Overtime

Most people are unaware that thyroid hormones produced

by the thyroid gland must be “activated” before they can benefit the body (Longo et al. 2012). A large amount of this activation (over 60%) happens in the liver; therefore, if the liver is working overtime, thyroid function may struggle. For example, a diet high in sugar and processed carbs, high alcohol intake, high coffee consumption (more than 4 cups per day) or environmental toxins all have a significant effect on the liver and, ultimately, on thyroid hormones.

An obese person with poor blood sugar control will be more prone to compromised liver health and fat accumulation in the liver (Moreno–Navarette et al. 2012). A nightly alcoholic drink, or worse, binge drinking, is also taxing on liver detoxification pathways. And the environment with daily exposure to toxins in air, water and food (pesticides, herbicides, etc.) increases the liver’s workload. All of these factors may impair liver function and thus reduce the conversion of T4 hormone to the active T3 form.

In part 2 of this article, we will take a look at the remaining 6 factors that can negatively effect your thyroid function and cause weight gain and other detrimental factors to your health and mood. We also will see what happened to Rachel after she treated her thyroid issue. Taking all the steps necessary to keep your thyroid functioning properly will “add hours to your day, days to your year and years to your life.”